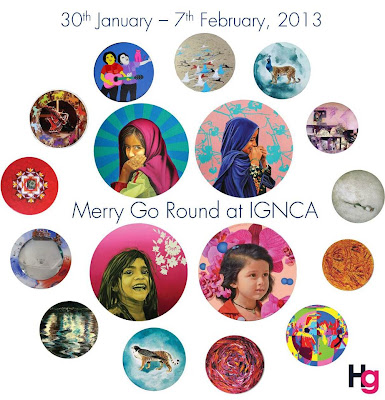 Registration, interpretation and chronicling are the modes in which Suchit Sahni(Self Taught Artist) interprets the city of Delhi as he understands it. Suchit considers himself as a stealer of city images and for him, an artist keeps plundering the vast treasure troves of images both hidden and apparent in a city’s body. And also he believes that the artist behaves like a contemporary Robin Hood, who gives the rich images back to the society with a deserving dividend. True to his philosophy, Suchit moves around the city of Delhi (and also many other cities that according to him impart the ‘feel’ of an India in transition) and from his moving car, he captures images from those places which had made an impression on his mind during his growing up years. These photographs that Suchit presents in this show both as an installation and a video projection, supply the artist with the primary sketches.

It is interesting to see how Suchit considers these photographs as a ‘starting point’. In artistic terms, he calls them ‘drawings’. Every time an artist approaches his canvas he has a set of mental or actual drawings with him; these doodles or lines provide them with the basic blue print for further alterations and manipulations on the real canvas. Even a random comparison between the photographs that function as Suchit’s drawings with the final works in the display would reveal that in none of these paintings the artist transfer the same image as seen in the photographs. Through his double manipulation on the drawings he yields not only a new image but also a new reality, which is apparently experiential and for the viewer, true reminders of their own lived/living experiences now mediated through colors, forms and rhythmic movements.

Suchit, in his works, invests his energies in two ways; one, he likes to live the city nostalgically and see how the city changes before his eyes even when some parts of it resist the change, leaving certain reminders of the past intact for the people to witness. Two, Suchit, as an artist, goes beyond the urges to realize the apparent instead, he wants to transcend it through imparting an intimate sense of abstraction. While the images of a tonga (horse driven carriage), scooter, old vans and cars, forts and so on stand evidence to the former stance of the artist, the distance of perception that he demands from the viewer exemplifies the abstract values that he invests in the images. As the viewer goes closer to the paintings, the images dissipate to reveal a riot of colors and forms. Suchit, within his paintings re-invents the same physical aspects of understanding a city through body adjustments within the actual urban sites.
JohnyML
http://johnyml.blogspot.com/
________________________________________